Duncan Fisher of the Buddhist Group of Kendal (Theravada) presented a traditional decorated lantern to the group at their recent Vesak celebration held on the 27th May 2010 at the United Reformed Church in Kendal. “Vesak lanterns are very popular in Buddhist countries such as Sri Lanka and Thailand – so I thought it would be nice to try making one” said Duncan, “however, I didn’t realise how much work it would require – in fact it has taken 10 months to complete!”

The festival of Vesak commemorates the Birth, Enlightenment and Passing Away of the Buddha and so Duncan’s lamp features illustrated scenes from the life of the Buddha. “After much hard work  I am pleased with the final result – I hope it serves the group at Vesak for many years to come” added Duncan. 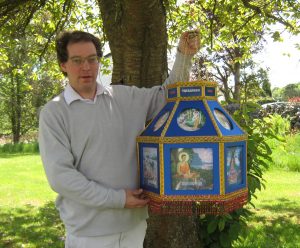 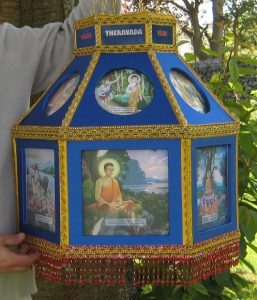