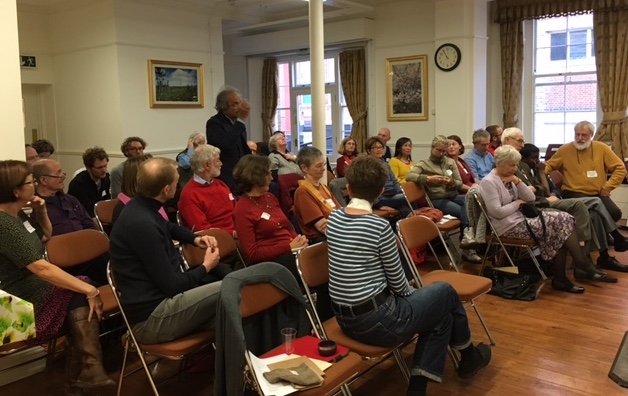 After the hugely successful European Buddhist Union weekend conference, “Buddhism in Action” in Berlin in April 2016, the NBO decided to bring this theme to our home shores as the subject for an afternoon gathering held after the NBO AGM 2106.

This free NBO event attracted a good turnout and a very lively and informative afternoon was had by all. It was a great opportunity for people of many Buddhist traditions to meet others and to share ideas, concerns, resources and, most importantly, to make friendships and links with people from other traditions and groups who are engaged in the same projects.

The audience listened to a talk by Munisha about the importance of spiritual friendship, after which everyone took part in a lovingkindness meditation. Then there were presentations and discussions on areas of work the NBO is currently engaged in:

Christine Thuring spoke passionately about Buddhist Action Month 2016 and her plans for an even bigger campaign in June 2017!

Jo Backus gave a really interesting and useful talk on Buddhism in Religious Education including her work on Buddhism in the curriculum and in writing a contribution to the syllabus for GCSE study.

Modgala engaged the audience with a talk about Buddhists working with refugees.

Keith Munnings and Martin McGonigle spoke about their work with Buddhist healthcare chaplaincy in the NHS.

The afternoon was a rich opportunity and much enjoyed by all, to the extent that it was difficult to bring all the animated conversations at the end of the afternoon to a close and persuade people to leave!

This event followed meetings of the NBO trustees and committee, held the same day.

This website uses cookies to improve your experience while you navigate through the website. Out of these, the cookies that are categorized as necessary are stored on your browser as they are essential for the working of basic functionalities of the website. We also use third-party cookies that help us analyze and understand how you use this website. These cookies will be stored in your browser only with your consent. You also have the option to opt-out of these cookies. But opting out of some of these cookies may affect your browsing experience.
Necessary Always Enabled
Necessary cookies are absolutely essential for the website to function properly. These cookies ensure basic functionalities and security features of the website, anonymously.
Functional
Functional cookies help to perform certain functionalities like sharing the content of the website on social media platforms, collect feedbacks, and other third-party features.
Performance
Performance cookies are used to understand and analyze the key performance indexes of the website which helps in delivering a better user experience for the visitors.
Analytics
Analytical cookies are used to understand how visitors interact with the website. These cookies help provide information on metrics the number of visitors, bounce rate, traffic source, etc.
Advertisement
Advertisement cookies are used to provide visitors with relevant ads and marketing campaigns. These cookies track visitors across websites and collect information to provide customized ads.
Others
Other uncategorized cookies are those that are being analyzed and have not been classified into a category as yet.
SAVE & ACCEPT
single